Definition of the Terms Pastor, Clergy, Minister — In General

Key point 1-02. While religious organizations may designate persons as ministers for their religious purposes free from any governmental interference, such a designation does not necessarily determine their legal or tax status.

For the reasons summarized in section 1-01, it often is important to determine if an individual is a minister for legal or tax purposes. This is often a difficult task given the multiplicity of tasks and vocations performed by persons that are "ministerial" in nature.

One court, in attempting to determine whether certain individuals were "ministers," quoted from an earlier decision of the United States Supreme Court: "Candor compels acknowledgment, moreover, that we can only dimly perceive the lines of demarcation in this extraordinarily sensitive area of constitutional law."[12] E.E.O.C. v. Southwestern Baptist Theological Seminary, 651 F.2d 277, 283 (5th Cir. 1981), cert. denied 456 U.S. 905 (1982), quoting Lemon v. Kurtzman, 403 U.S. 602, 612 (1971). This same court made an additional and very important observation that has been repeated many times:

While religious organizations may designate persons as ministers for their religious purposes free from any governmental interference, bestowal of such a designation does not control their extra-religious legal status. [13] Id.

This is an important point. No court will interfere with a church's decision to designate anyone it chooses as a minister. However, the courts are not bound by such ecclesiastical designations in defining the term "minister" for legal or tax purposes. Consider the following examples:

How have the civil courts defined the terms pastor, clergy, or minister? Before answering this question it must be acknowledged that attempts by the civil courts to define ecclesiastical terms often are awkward and inadequate. This is due in part to the fact that the meaning of such terms varies widely among religious groups, and even within the same group. To illustrate, it is common for religious denominations to recognize more than one category of ministry. The problem is compounded by the inexperience of judges in dealing with such terminology. The result is that judicial definitions of the terms pastor, clergy, and minister are not consistent or satisfactory. The United States Supreme Court observed more than a century ago that "[i]t is not to be supposed that the judges of the civil courts can be as competent in the ecclesiastical law and religious faith of all these bodies as the ablest men in each are in reference to their own."[18] Watson v. Jones, 80 U.S. 679, 729 (1871).

Example. The Tax Court has acknowledged the difficulties associated with any attempt by the civil courts to define ecclesiastical terms: "As a judicial body we are loath to evaluate ecclesiastical authority in the various religious disciplines."[19] Haimowitz v. Commissioner, T.C. Memo. 1997-40 (1997).

It is important to recognize that courts do not define the terms pastor, clergy, and minister in a vacuum. Generally, the courts are called upon to define these terms in applying a specific law or rule. In deciding whether or not an individual is a pastor, member of the clergy, or minister for legal or tax purposes, the following three steps should be followed:

The most cited definition of the term clergy was announced by a federal appeals court:

As a general rule, if the employee's primary duties consist of teaching, spreading the faith, church governance, supervision of a religious order, or supervision or participation in religious ritual and worship, he or she should be considered "clergy."[20] Rayburn v. General Conference of Seventh-Day Adventists, 772 F.2d 1164, 1169 (4th Cir. 1985), quoting Bagni, Discrimination in the Name of the Lord: A Critical Evaluation of Discrimination by Religious Organizations, 79 COLUM. L. REV. 1514, 1545 (1979).

In a unanimous 2012 ruling, the United States Supreme Court affirmed the so-called "ministerial exception" barring civil court review of employment disputes between churches and ministers.[21] Hosanna-Tabor Evangelical Lutheran Church and School v. E.E.O.C., 132 S.Ct. 694 (2012). This case is addressed fully in section 2-04.1 of this text. The Court, in addressing the definition of a "minister" in applying the exception, made the following observations:

First, the Court declined "to adopt a rigid formula for deciding when an employee qualifies as a minister." But it concluded that the plaintiff in this case, a called teacher and commissioned minister in a Lutheran school, was a minister to whom the ministerial exception applied. As a result, her claims of disability discrimination and retaliation against a church-operated school had to be dismissed.

Second, in support of its decision that the plaintiff was a minister, the Court applied a four-factor test:

The Court acknowledged that the teacher's religious duties "consumed only 45 minutes of each workday, and that the rest of her day was devoted to teaching secular subjects." However, the Court noted that it was unsure whether any church employees devoted all their time to religious tasks: "The heads of congregations themselves often have a mix of duties, including secular ones such as helping to manage the congregation's finances, supervising purely secular personnel, and overseeing the upkeep of facilities."

The case before us is an employment discrimination suit brought on behalf of a minister, challenging her church's decision to fire her. Today we hold only that the ministerial exception bars such a suit. …

The interest of society in the enforcement of employment discrimination statutes is undoubtedly important. But so too is the interest of religious groups in choosing who will preach their beliefs, teach their faith, and carry out their mission. When a minister who has been fired sues her church alleging that her termination was discriminatory, the First Amendment has struck the balance for us. The church must be free to choose those who will guide it on its way.

Third, the Supreme Court declined to define the term "minister" in the context of the ministerial exception, choosing rather to let the civil courts define the term in the course of future litigation. A few courts have done so. The leading definitions are the following:

A woman began her employment as choirmaster of a church and thereafter became the director of music. While employed, she allegedly suffered from a variety of disabilities, including asthma, osteoarthritis of both knees, migraine headaches, and endometriosis. She claimed that the church refused to modify her work schedule to allow full recovery from knee surgery and, after she suffered chemical exposures from cleaning materials, refused to accommodate her chemical sensitivities. Her employment was terminated, and she sued the church claiming that she was discharged in violation of the Americans with Disabilities Act. The church claimed that the woman's lawsuit was barred by the First Amendment's religion clauses. The court concluded that the woman's position at the church was "within the parameters" of the ministerial exception from civil rights laws. It pointed out that "the Director of Music was responsible for duties squarely within the conventional understanding of ecclesiastical or religious functions, and was not a position mainly performing tasks which are not traditionally ecclesiastical or religious." The court noted that "the ministerial exception has not been limited to members of the clergy," but rather "encompasses all employees of a religious institution, whether ordained or not, whose primary functions serve its spiritual and pastoral mission."

This ruling was affirmed by a federal appeals court. The court noted the following three factors to consider in deciding if a church employee is a "minister" for purposes of the ministerial exception: (1) Are employment decisions regarding the position at issue made "largely on religious criteria"? (2) Is the employee authorized to perform the ceremonies of the church? (3) Does the employee engage in activities traditionally considered ecclesiastical or religious? The court concluded that the music director was a minister based on an analysis of these three factors. The court cautioned that the role of the civil courts in applying the "ministerial exception" was to focus on "the action taken, not possible motives," and that a church is "not required to advance a theological or religious explanation regarding its allegedly illegal employment actions."

In deciding if someone is a minister, the following three factors must be considered: (1) are employment decisions regarding the position made "largely on religious criteria"; (2) is the person authorized to perform the ceremonies of the church; and (3) is the person "engaged in activities traditionally considered ecclesiastical or religious," including whether he or she "attends to the religious needs of the faithful." [23] Starkman v. Evans, 198 F.3d 173 (5th Cir. 1999).

It is likely that the Rayburn and Starkman cases will continue to be used in defining the term "minister" in employment discrimination cases brought by employees who do not satisfy the four factors enumerated by the Supreme Court in the Hosanna-Tabor case.

Most courts have concluded that the terms pastor, clergy, and minister, when used in a legal context, connote a person who has been recognized as a minister by a church or denomination through a formal process rooted in ecclesiastical doctrine and practice, and who has been invested thereby with authority to perform some or all of the rites and practices of said church or denomination. Laws referring to pastors, clergy, and ministers are enacted for a purpose that assumes the dignity and unique role of the profession. For example, clergy typically are invested by law with authority to solemnize marriages and to maintain the confidences shared with them by those seeking spiritual counsel. It is understandable, then, that the courts have been reluctant to recognize as clergy or ministers those who seek such status through a simple and informal process unrelated to any recognized church or sect, particularly if the status was obtained for ulterior motives (such as tax savings). 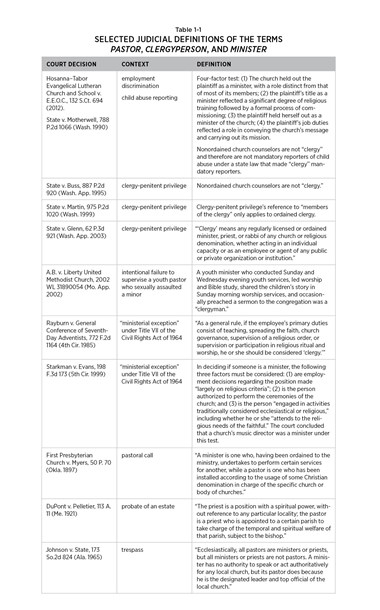 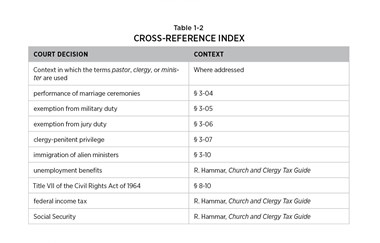