Do You Know How to Select Church Insurance?

16 questions to help select and retain your church's insurance.

Use the following check list to gauge how your church is selecting insurance. 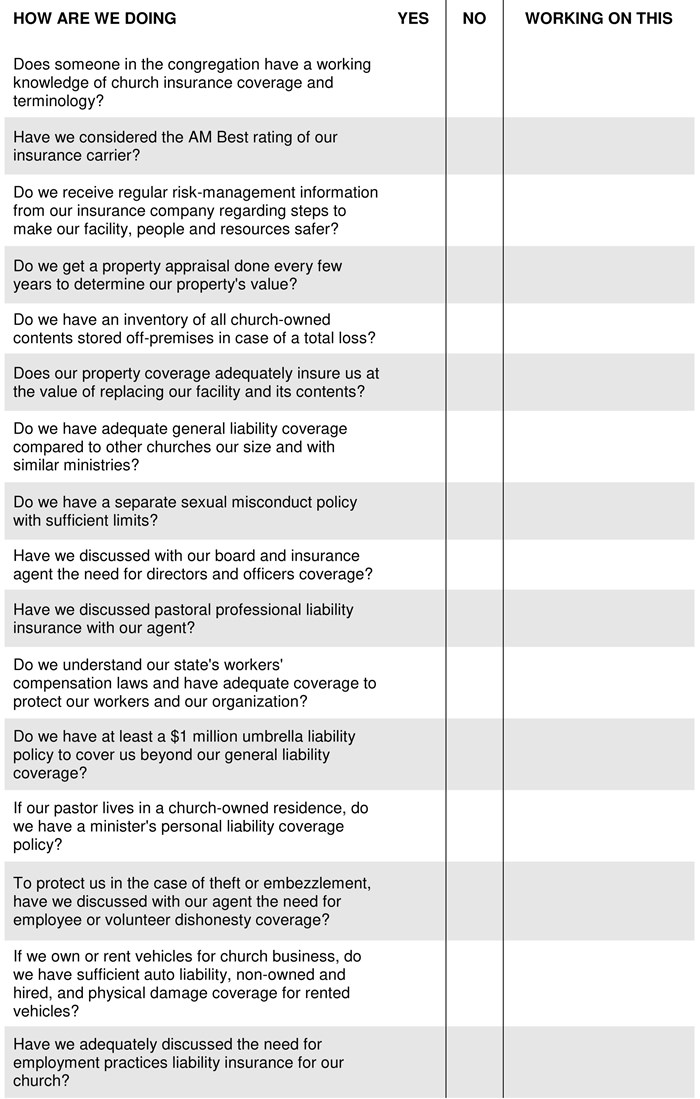 Why Learn about Insurance

True story: A pastor arrived at his church property only to witness the entire building burning in flames. It was a total loss. The following morning, as he wondered where the church would meet, and whether they had enough coverage to rebuild, he found out the church was underinsured. It would cost well over $1 million to rebuild what they had lost. But with only $700,000 in coverage, what were their options?

True story: After carefully performing reference and background checks, a church hired a part-time youth pastor. One year later, when he admitted to engaging in inappropriate behavior with students, he was arrested and charged. It was determined that there was prior knowledge of an incident, but no action had been taken. When the church was sued by parents, the church—without separate sexual misconduct coverage—quickly reached its general liability limit and was forced to find money from reserves, donations, and loans to pay the judgments.

Regardless of good intentions, inadequate church insurance can lead to significant and permanent losses. Some churches never recover. Though nearly every church has insurance coverage, many church leaders lack confidence in their understanding of their policies and the terminology associated with them.

So let me encourage you: You are not alone. Guidance is available, and you’re already taking important steps in receiving it. As you gain a better understanding of church insurance, as well as your church’s specific needs, you are making progress toward better safeguarding your ministry.

When it comes to church insurance, you must be informed. Get to know your insurance agent. And purchase only from a company that offers not only good prices, but good service, claims coverage, and specific knowledge of church insurance issues.

Support your ministry with the most authoritative and comprehensive, year-round tax resource.

Know the situations in which a pastor is personally liable for wrongdoing.
Buy now

Do You Know How to Select Church Insurance?