Do We Understand the Effects of Our Church's Political Activity?

Assess how your congregation's choices work in relation to the tax code.

When it comes to political activity, churches need to understand their constitutional protections, as well as the Internal Revenue Code’s restrictions for 501(c)(3) tax-exempt organizations. Take the following quiz to test your knowledge. The answer key is at the end of the article. 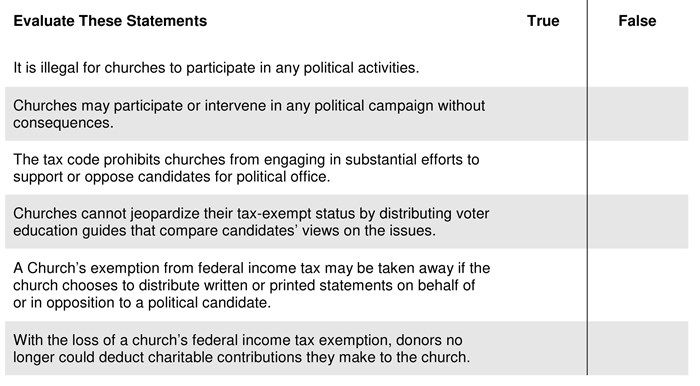 The income tax regulations interpreting the limitation on political campaign intervention provide that neither a church nor any other organization can be exempt from federal income taxation if its charter empowers it “directly or indirectly to participate in, or intervene in (including the publishing or distributing of statements), any political campaign on behalf of or in opposition to any candidate for public office.” The regulations further provide that:

The term “candidate for public office” means an individual who offers himself/herself, or is proposed by others, as a contestant for an elective public office, whether national, state, or local. Activities that constitute participation or intervention include, but are not limited to, the publication or distribution of written or printed statements or the making of oral statements on behalf of or in opposition to such a candidate.

None of the political activities described above are “illegal.” The primary legal consequence of church political activity is that the church’s exemption from federal income taxation may be jeopardized.

These consequences should be considered when deciding whether or not to engage in political activities that may jeopardize the church’s tax-exempt status.

Support your ministry with the most authoritative and comprehensive, year-round tax resource.

Do We Understand the Effects of Our Church's Political Activity?