Moving through the final stages of merging churches—and other options if a merger is not right for you.

The steadily changing landscape of the church in America, along with the financial uncertainties brought about by the 2020 global pandemic, have prompted some churches to weigh their long-term futures.

This four-part series on church mergers equips church leaders to discover a viable option for sustaining or growing a church.

Part 1: Is a Merger the Right Next Step for Your Church?

Part 2: The Documents Needed for a Successful Church Merger

Reflecting several years back on its survey about church mergers, the Leadership Network concluded:

Each year, thousands of U.S. churches—plus tens of thousands of others elsewhere around the globe—are sensing that they could fulfill their God-given mission better together than separately. They’re exploring new ways to join forces for the advancement of God’s kingdom.

Mergers are happening with increasing frequency. And unlike in previous generations, many church mergers today are producing positive growth and admirable fruit. Increasingly, they are becoming a vehicle for unifying local congregations around a shared mission that is producing more effective spiritual and social impact. . . .

[Churches in a merger] become one to achieve a common purpose: working together as a vibrant, healthy expression of Christ’s body, the church.

Uniting to achieve a common mission is a common goal of a church merger, but how is it done? What actions should be taken once the decision to merge has properly been made?

While the missional and spiritual considerations in a church merger are of critical import to review at the very beginning of discussions, I have found that there is sorely little direction in the legal fundamentals of a church merger.

This church merger series serves as a primer of sorts, to share with church leaders what documents and information needs to be gathered for review, what decisions need to be made, and now, in this article, what actions must be taken to successfully complete a merger.

Depending upon the legal structure of the merger, a new legal entity will need to be formed, usually in the state where the church principally operates. Here are three important considerations:

Governance styles, as detailed in Part 3, differ from church to church. Do not assume all churches envision this the same way. With your specific style in mind, take the following actions:

Note. I admit that this can be a tricky step, and it may require calling in a professional if you have not already been working with an attorney or consultant. I have reviewed hundreds of bylaws over my 20 years of practice, and I’ve never seen any two churches whose bylaws are exactly the same. And, unless the merging churches are in the same denomination and, accordingly, using the same denominational template, some serious finessing of the bylaws will be necessary. 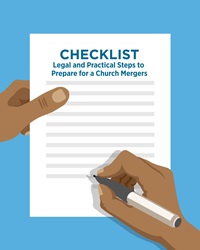 Rather than losing yourself in the weeds to start with, I recommend the following: (1) review the state requirements for bylaws—every state has statutes that will provide you with the needed baseline; (2) discuss among the church leaders from both congregations how they envision critical decisions being made and by whom; and (3) review the current set of bylaws to see what can be kept and what will need to be revised.

Of course, transparency with the congregation and involvement of the appropriate board members and other leaders will be necessary. Unlike articles of incorporation that must be filed with the secretary of state for the state in which the organization is to be formed, bylaws are adopted internally—so buy-in by the leaders and congregations of the respective churches is crucial.

During the due diligence stage, the merging churches should have compiled critical data about the respective churches’ real property interests and determined which property (or properties) would be maintained after the merger. As a result, and upon having the proper approvals from a governance perspective, the merging churches should take any of the following actions that apply to the situation:

As due diligence and discussions about the potential merger progress, evaluations about the ministry programs affected by a union—including the pastoral roles involved with those ministries—need to take place. Some pastors will remain aboard after the merger. On the other hand, due to any number of reasons, some pastors may not stay on after the merger. As it relates to these decisions about pastoral staff, the following actions will need to be taken:

Similarly, due diligence and discussions will reveal which non-ministerial staff remains after the merger and which ones do not. The following actions will need to be taken:

Matters related to theology likely were discussed before the merger reached this point. However, documenting the tenets of faith of the merged church provides an easily reviewable way for members to know that the joining churches agree on underlying theology.

Please use my helpful checklist to ensure that you note other transitional issues. These include other insurance matters, updating state and IRS records with the merged church’s new information, and taking time to plan an appropriate celebration to commemorate the merger.

On the softer side, it will be important to ensure that the merged congregations feel equally welcomed into the merged church, even if one of the churches is larger and/or financially stronger than the other. Church leadership will want to be very intentional in building opportunities for members to connect with each other and serve together.

Just like in a marriage, the union isn’t perfected the moment the couple says “I do.” A couple becomes one through a wedding ceremony, but truly bonds together emotionally, physically, and spiritually over time. The same is true for a merged church. The merging churches must be intentional in bringing about the bonding of the leadership as well as the congregation. Training and staff building activities are critical at this stage.

Once the merger has been finalized and the congregations have come together under one umbrella, things move from hypothesis to reality. The process of evaluating and ensuring that things go well post-merger is called merger integration. Assuming all parties to the merger have done their best to prepare for the merger, you’ll be able to see how things actually work after closing.

This is the time to ask a number of pertinent questions: Are there unexpected redundancies in church programs? How aligned is the pastoral team to the merged church’s vision and conduct? How are the merged church’s finances? Did weekly attendance increase relatively similarly to the size of the combined congregations before the merger? How effective has it been to combine IT systems? Is the current church structure suitable for the merged church? These key questions will allow the merged church to evaluate what additional tweaks and changes should be made to ensure continued success.

In this evaluation stage, it will be important for all involved in the merger to recognize that the merger by definition will mean that the merged church will look different from any of the churches as they existed separately. The temptation to hold onto the past can be averted by considering what brought the parties to the table in the first place.

Options other than merger

While a merger may have huge benefits, you may have concluded—upon reading this series of articles—that you’re not interested to go forward with this option. If a church doesn’t believe a merger is appropriate, or the timing is not right to merge, two or more churches may find other ways to work together to share resources and better serve the community. Those other opportunities could include the following.

Let’s say one church has resources another church needs, such as office space, equipment, facilities, or even staff. The church that has needed resources could enter into a cost-sharing agreement with the other church.

For this to work, it’s important that the churches have similar missions and purposes. Further, and as the saying goes, good fences make good neighbors, so it is critically important the churches adopt a well-drafted agreement. Such an agreement would include the purpose of the arrangement, the term, payment structure, and also provide for a system of how any conflicts should be resolved.

In this instance, two or more churches would remain autonomous, yet identify one space they could use jointly—at different, agreed-upon times—and split the cost. Thus, each church could use the space to expand its programs.

Again, a well-drafted agreement must be adopted by the two churches. In such an agreement, the churches want to make clear who is allowed onto the space, when the churches get access to the space, who has the responsibility to maintain and clean the space, how insurance coverage would work, and the payment structure.

Connect with a denomination that may be overloaded with properties

I once helped to bring together a denomination that had a surplus of property and a local church that was bursting at the seams with people and programs. Specifically, I assisted the denomination in leasing some excess property to the local church so it could expand and create a new campus utilizing one of the denomination’s unused church properties.

If your church owns a facility that is underutilized, you may consider subleasing a portion of the space to another church. Of course, you must confirm that your current lease (if you are not the owner) allows for such an arrangement. And work with a competent professional in preparing the sublease terms.

A sublease arrangement can also be the first step in seeing how a church operates and whether it may be, at a future time, a good merger partner.

A tool for greatest eternal good

After journeying with me through this four-part series, you have learned the nuts and bolts of a church merger, the merger options, the documents and information needed to evaluate a possible merger, and how to go about the process if a merger is right for your church.

Perhaps, at the end of it all, you have decided that a merger is not right for you (or is not right at this time). In either case, using the downloadable checklist and making note of the legal and financial ways to operate as a best practice will position your church for organizational strength.

Keep in mind, though, that a successful merger does not happen by chance.

A successful merger is one where due diligence produces a stable outcome. Each step is important, including the document-gathering stage, the decision-making stage, and the final-steps stage detailed in this article.

I have adopted the saying that the greatest room is the room for improvement. Whatever way a church can position itself for the greatest amount of eternal good is worth the effort. A merger may be the tool for churches to emerge in a new and exciting way.

Also in this series:

Part 1: Is a Merger the Right Next Step for Your Church?

Part 2: The Documents Needed for a Successful Church Merger

What leaders must know to conduct legally sound church business.

A toolkit for legal and compliant business meetings 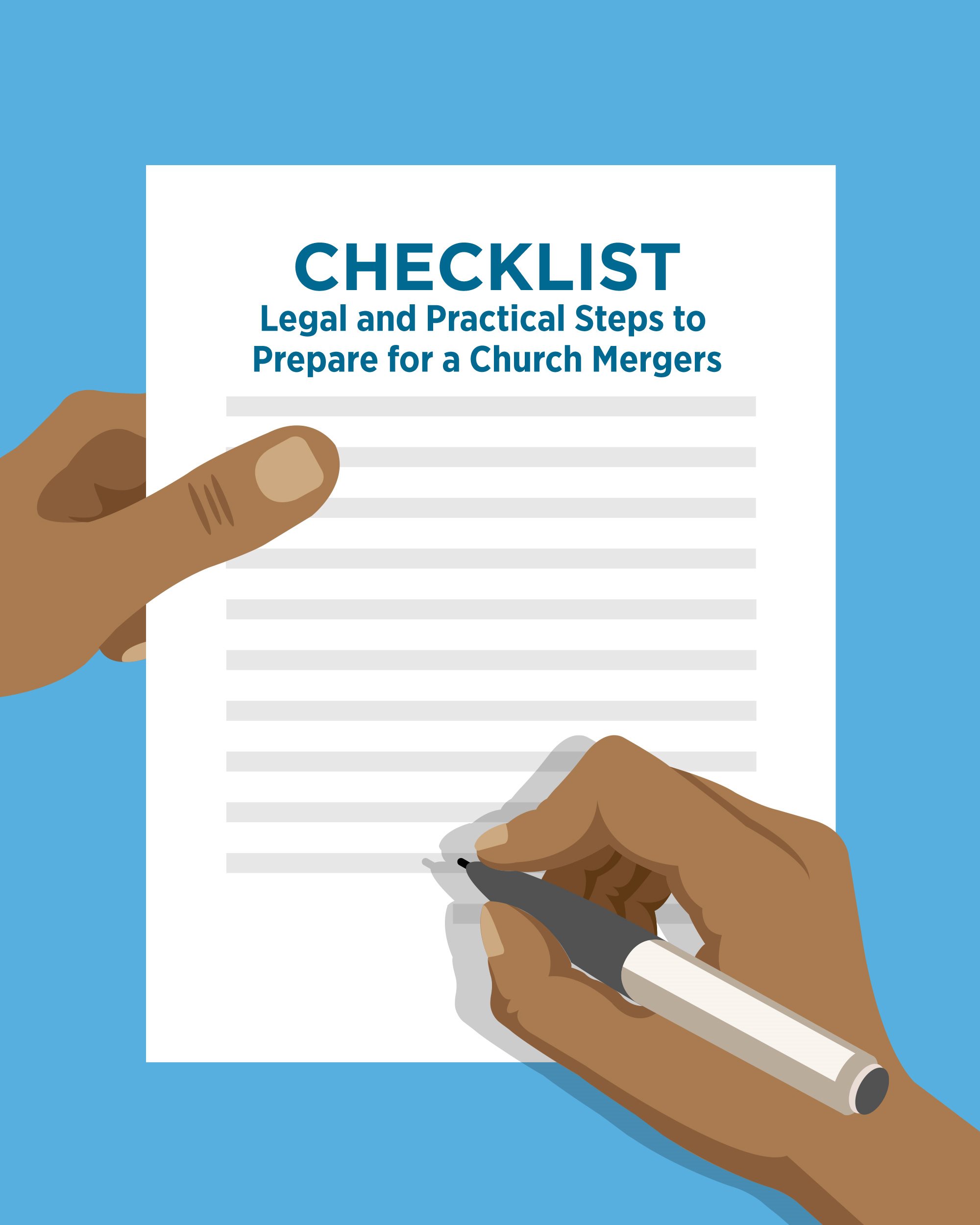