The Legal Effect of a Group Exemption Ruling

Recognition of exemption from federal income tax under section 501(c)(3) of the Internal Revenue Code may be obtained on a group basis for "subordinate organizations" affiliated with and under the supervision or control of a "central organization." 308 Rev. Proc. 80-27, 1980-1 C.B. 677. This procedure relieves each of the subordinates covered by a group exemption letter of the necessity of filing its own application for recognition of exemption. To be eligible for a group exemption ruling, a central organization must obtain recognition of its own exempt status. It must also submit to the IRS information on behalf of those subordinates to be included in the group exemption letter. The required actions are summarized in Table 10-7. 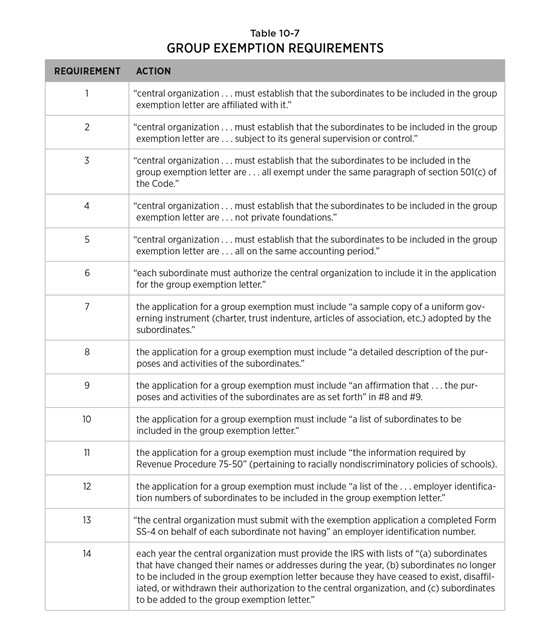 The group exemption procedure technically is available only to "connectional," or hierarchical, church organizations consisting of a "central organization" that exerts "general supervision or control" over "subordinate" local churches and church agencies. There are many conventions and associations of churches, however, that exert little if any "general supervision or control" over "subordinate" churches. Up until now, these "congregational" conventions and associations of churches have had to construe the group exemption requirements very loosely in order to obtain the benefits of a group exemption. Many have done so. A potential problem with such an approach is that the association or convention of churches itself may increase its potential liability for the misconduct and improprieties of affiliated churches and clergy, since in pursuing the group exemption the association or convention must affirm that it does in fact exercise "general supervision or control" over its affiliates. Such an affirmation could serve as a possible basis of legal liability.

Any attempt to use a group exemption ruling as evidence of denominational liability for the obligations of affiliated churches faces formidable obstacles, including the following:

1. No court has recognized such a basis of liability. No court in the history of this country has found a denominational agency liable on the basis of a group exemption ruling.

2. One court has rejected this basis of liability. There has been only one reported case in which a group exemption ruling was cited as evidence in support of an ascending liability claim. 309 Kersh v. The General Council of the Assemblies of God, 804 F.2d 546 (9th Cir. 1986). A federal appeals court upheld a district court's summary judgment in favor of the national Assemblies of God church (the "General Council of the Assemblies of God") in a case claiming that the national church was legally responsible for the alleged securities fraud of an affiliated church.

This language is significant, since the IRS concedes that the "control" that is needed to qualify for a group exemption may be ecclesiastical. Certainly, it could be said that many national and regional denominational agencies exercise some degree of "ecclesiastical" control over affiliated churches. But this kind of control certainly cannot support legal liability. Unfortunately, this language was dropped from subsequent editions of the Guide. However, the language in the original edition is still useful.

4. IRS bias in favor of hierarchical churches. "Congregational" associations and conventions of churches are forced to interpret the "control" language loosely because of the discrimination by the IRS against such organizations in favor of connectional, or hierarchical, church organizations. The current group exemption procedure, granting favored status only to connectional church organizations, is suspect under the Supreme Court's interpretation of the First Amendment's nonestablishment of religion clause. In 1982, the Court invalidated a Minnesota law that imposed certain registration and reporting requirements upon religious organizations soliciting more than 50 percent of their funds from nonmembers. 310 Larson v. Valente, 410 U.S. 437 (1982). The Court observed that "when we are presented with a state law granting a denominational preference, our precedents demand that we treat the law as suspect and that we apply strict scrutiny in adjudging its constitutionality." The Court concluded that any law granting a denominational preference must be "invalidated unless it is justified by a compelling governmental interest, and unless it is closely fitted to further that interest."

Similarly, a federal appeals court, in construing section 6033 of the Internal Revenue Code, observed: "If 'church' were construed as meaning only hierarchical churches such as the Catholic Church—[this] would result in an unconstitutional construction of the statute [IRC 6033] because favorable tax treatment would be accorded to hierarchical churches while being denied to congregational churches, in violation of the First Amendment." 311 Lutheran Social Service of Minnesota v. United States, 758 F.2d 1283 (8th Cir. 1985).

There is no conceivable governmental interest that would justify the government's stated preference for connectional church organizations in the present group exemption procedure.

5. Noncompliance with the group exemption requirements. Many denominational agencies that have obtained group exemptions have not fully complied with the requirements summarized in Table 10-7. Some do not even meet a majority of them. Obviously, these "requirements" do not mean much. As a result, little if anything can be made of the "general supervision or control" language.