Key point 13-03. The First Amendment prohibits the recitation of prayers by school officials and clergy in public schools or at public school events, including graduation ceremonies and sports activities. However, some courts have allowed student-initiated prayers during such events.

The issue of student-initiated religious activities on public school property is addressed in section 13-07.

A number of federal courts have addressed the question of whether prayers at public school graduation ceremonies violate the First Amendment's Nonestablishment of Religion Clause. Illustrative cases are summarized below. In a 1992 ruling, the United States Supreme Court concluded that such prayers are unconstitutional, at least in some situations.[17] Lee v. Weisman, 505 U.S. 577 (1992). The case involved a challenge to a public high school policy that allowed members of the clergy to give invocations and benedictions at middle school and high school graduations. Clergy were provided with a pamphlet entitled "Guidelines for Civic Occasions," prepared by the National Conference of Christians and Jews, and were advised that the invocation and benediction should be nonsectarian.

The Supreme Court, by a majority of five votes to four, ruled that prayers offered at public high school graduation ceremonies violate the First Amendment's "Nonestablishment of Religion Clause. The Court concluded that a public high school graduation ceremony that includes prayers exerts a "psychological coercion" or pressure on everyone to conform, even those who are personally opposed to prayer. The Court observed:

The undeniable fact is that the school district's supervision and control of a high school graduation ceremony places public pressure, as well as peer pressure, on attending students to stand as a group or, at least, maintain respectful silence during the invocation and benediction. This pressure, though subtle and indirect, can be as real as any overt compulsion. Of course, in our culture standing or remaining silent can signify adherence to a view or simple respect for the views of others. And no doubt some persons who have no desire to join a prayer have little objection to standing as a sign of respect for those who do. But for the dissenter of high school age, who has a reasonable perception that she is being forced by the state to pray in a manner her conscience will not allow, the injury is no less real. There can be no doubt that for many, if not most, of the students at the graduation, the act of standing or remaining silent was an expression of participation in the Rabbi's prayer. That was the very point of the religious exercise. It is of little comfort to a dissenter, then, to be told that for her the act of standing or remaining in silence signifies mere respect, rather than participation. What matters is that, given our social conventions, a reasonable dissenter in this milieu could believe that the group exercise signified her own participation or approval of it.

The Court acknowledged that participation in graduation ceremonies is voluntary, and that students who are opposed to prayers can simply not attend. But it concluded that the voluntary nature of the ceremony did not mean that prayers had to be allowed. It noted:

[T]o say a teenage student has a real choice not to attend her high school graduation is formalistic in the extreme. True, [the student] could elect not to attend commencement without renouncing her diploma; but we shall not allow the case to turn on this point. Everyone knows that in our society and in our culture high school graduation is one of life's most significant occasions. A school rule which excuses attendance is beside the point. Attendance may not be required by official decree, yet it is apparent that a student is not free to absent herself from the graduation exercise in any real sense of the term "voluntary," for absence would require forfeiture of those intangible benefits which have motivated the student through youth and all her high school years. Graduation is a time for family and those closest to the student to celebrate success and express mutual wishes of gratitude and respect, all to the end of impressing upon the young person the role that it is his or her right and duty to assume in the community and all of its diverse parts.

The Court acknowledged that a majority of those attending graduation ceremonies probably have no objection to prayers being offered, and would even prefer that they be. It concluded, however, that "[w]hile in some societies the wishes of the majority might prevail, the Establishment Clause of the First Amendment is addressed to this contingency and rejects the balance urged upon us. The Constitution forbids the state to exact religious conformity from a student as the price of attending her own high school graduation."

The Court acknowledged that

[w]e do not hold that every state action implicating religion is invalid if one or a few citizens find it offensive. People may take offense at all manner of religious as well as nonreligious messages, but offense alone does not in every case show a violation. We know too that sometimes to endure social isolation or even anger may be the price of conscience or nonconformity. But, by any reading of our cases, the conformity required of the student in this case was too high an exaction to withstand the test of the establishment clause.

The Court concluded its opinion with the following statement:

Our society would be less than true to its heritage if it lacked abiding concern for the values of its young people, and we acknowledge the profound belief of adherents to many faiths that there must be a place in the student's life for precepts of a morality higher even than the law we today enforce. We express no hostility to those aspirations, nor would our oath permit us to do so. A relentless and all-pervasive attempt to exclude religion from every aspect of public life could itself become inconsistent with the Constitution. We recognize that, at graduation time and throughout the course of the educational process, there will be instances when religious values, religious practices, and religious persons will have some interaction with the public schools and their students. But these matters, often questions of accommodation of religion, are not before us. The sole question presented is whether a religious exercise may be conducted at a graduation ceremony in circumstances where, as we have found, young graduates who object are induced to conform. No holding by this Court suggests that a school can persuade or compel a student to participate in a religious exercise. That is being done here, and it is forbidden by the establishment clause of the First Amendment.

The Supreme Court's decision in the Lee case does not necessarily preclude all prayers at public graduation ceremonies, as some of the following cases demonstrate.

In many cases, students who are barred from performing religious music during public school ceremonies or events claim that their constitutional right to free speech has been violated. Most courts have analyzed these claims by focusing on the "forum" in which the music was to be performed. Generally, the courts have divided government property into four categories: public fora, designated public fora, nonpublic fora, and limited public fora. Table 13-1 defines each of these fora. 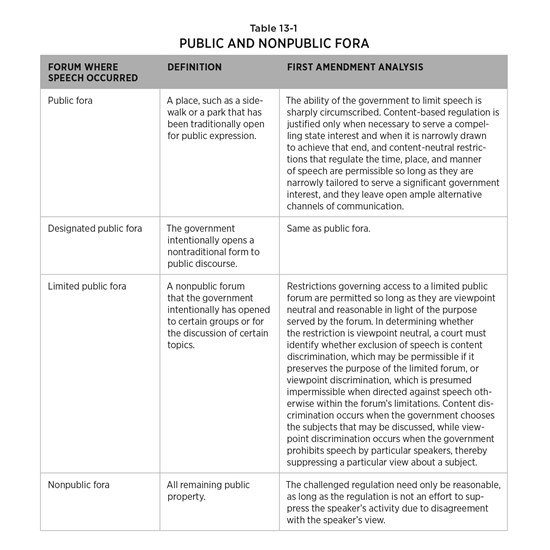