In the Course of Discipline

Key point 3-07.05. In some states the clergy-penitent privilege only applies to communications made to a minister in the course of "discipline." While most courts interpret this requirement broadly to cover statements made in the course of spiritual counsel and advice, others have interpreted it narrowly to apply only to confessions made to Catholic priests.

Several state laws limit the clergy-penitent privilege to communications made to a minister "in the course of discipline enjoined by the rules or practice" of his or her church. Some courts have interpreted this language strictly. As a result they apply the privilege only to communications "made in the understood pursuance of that church discipline which gives rise to the confessional relation, and, therefore, in particular to confessions of sin only, not to communications of other tenor."[115] In re Estate of Soeder, 220 N.E.2d 547, 568-69 (Ohio 1966). See also notes 91 and 92, supra, and accompanying text.

The courts generally have construed the term discipline broadly, extending the privilege to all confidential communications made to clergy acting in their professional capacity as spiritual advisers. In a leading case, one court, in interpreting the phrase in the course of discipline enjoined by the rules or practice of the religious body to which he belongs, observed:

The word "discipline" … has no technical legal meaning. … The "discipline enjoined" includes the "practice" of all clergymen to be trained so as to … concern themselves in the moral training of others, and to be as willing to give spiritual aid, advice, or comfort as others are to receive it. … So it is in the course of "discipline enjoined" by the "practice" of their respective churches that the clergyman is to show the transgressor the error of his way; to teach him the right way; to point the way to faith, hope, and consolation; perchance, to lead him to seek atonement. … It is important that the communication be made in such spirit and within the course of "discipline," and it is sufficient whether such "discipline" enjoins the clergyman to receive the communication or whether it enjoins the other party … to deliver the communication. Such practice makes the communication privileged, when accompanied by the essential characteristics. … The fundamental thought is that one may safely consult his spiritual adviser. … When any person enters that secret chamber, this statute closes the door upon him, and civil authority turns away its ear.[116] In re Swenson, 237 N.W. 589 (Minn. 1931). See also Waters v. O'Connor, 103 P.3d 292 (Ariz. 2004) (the "in the course of discipline enjoined by the church" requirement in the clergy-penitent privilege statute is not limited to formal confessions but also encompasses "communications anchored in the ecclesiastical rules, customs and laws of the applicable religious group").

One court recognized that a narrow interpretation of the requirement that confidential communications be made "in the course of discipline enjoined by the rules or practice" of a church would largely restrict the privilege to the Roman Catholic Church, since most Protestant denominations have no formalized system of "discipline."[117] In re Estate of Soeder, 220 N.E.2d 547 (Ohio 1966).

Another court labeled any such limitation of the privilege to the clergy of one denomination an "absurdity."[118] In re Swenson, 237 N.W. 589 (Minn. 1931). Such an interpretation, favoring the clergy of one sect, would present serious constitutional problems, since the First Amendment prevents states from passing laws which arbitrarily favor one sect to the disadvantage of others.[119] Everson v. Board of Education, 330 U.S. 1 (1947). In 1982, the United States Supreme Court ruled that "when we are presented with a state law granting a denominational preference, our precedents demand that we treat such a law as suspect" and that it be invalidated unless it (1) is justified by a compelling governmental interest, and (2) is closely fitted to further that interest.[120] Larson v. Valente, 456 U.S. 228 (1982). This standard could not be satisfied by a state law recognizing the privileged status of confidential communications only in the context of one or a few religious organizations to the exclusion of all others.

Courts in most states broadly interpret the requirement that the confidential communication be made in the course of discipline, and extend the privilege to any communication made in confidence to clergy acting in their professional capacity as spiritual advisers. Such an interpretation is not only permissible in view of the lack of any technical legal definition of the term, but it is also socially desirable since it encourages spiritual counseling. Some of the more recent clergy-penitent privilege statutes have avoided any reference to the term discipline. Rule 505 of the Uniform Rules of Evidence, which has been adopted by several states, provides that the privilege extends to any confidential communication made "to a cleric in the cleric's professional capacity as spiritual adviser." There is no reference to "discipline."[121] Simpson v. Tennant, 871 S.W.2d 301 (Tex. App. Houston 1994). 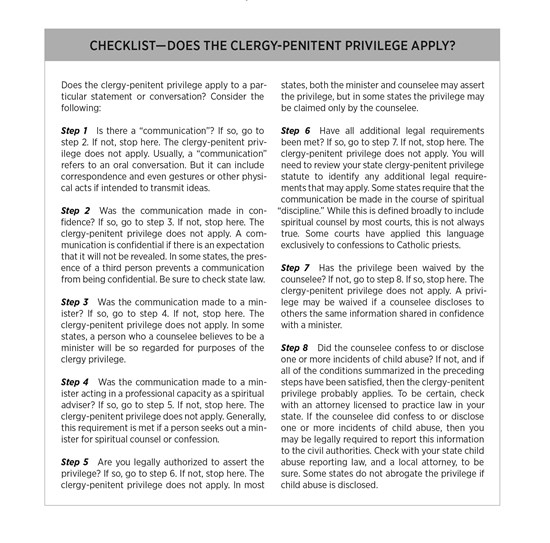