Key point 7-20.04. A church may be legally responsible for assaults occurring on its premises if similar assaults occurred on or near the premises in the recent past and the church failed to take reasonable precautions.

Most churches in America are safe places. While incidents of shootings on church property are shocking, they are rare, averaging one or two per year. But because of the "open access" policy of most churches, they remain easy targets for violent acts. While such acts cannot be prevented, there are steps that church leaders can take to manage the risk.

"Yet again, we have seen a sanctuary violated by gun violence, taking children brimming with faith and promise and hope before their time. Our nation's support and prayers are with the families of the victims, those still suffering in the hospital, and the entire Fort Worth community. Federal law enforcement officials are now working with state officials and local authorities to find all the answers. But we know we have to redouble our efforts to protect our children. We know we have to act as if it were our own children being targeted by gun violence. We know that there is nothing we can do to assure that this will never happen, but there is a lot more we can do to assure that it will happen more rarely; and I can only hope that the shock of this event will spur that kind of action."

The optimal response to the threat of an armed assailant on church property is to have two or more uniformed law enforcement officers on site during church services, with a police car parked in a highly visible location outside the church. Such persons are thoroughly screened before being hired as police officers; they receive extensive training in dealing with volatile situations and the use of firearms; they receive continuing training in the use of firearms and job-related skills; they serve as a deterrent to crime because of their uniform and vehicle; and, according to some courts, become "on-duty" police officers even while otherwise acting as private security guards when responding to criminal activity, which can reduce a church's liability based on negligence for their actions.

Churches considering the use of uniformed off-duty police officers should check with the local police department regarding the recruitment of such persons as security guards, and the number that are needed. There is a cost involved in using police officers to provide security, but the cost impact is diminished by the fact that you will not be using them for more than a few hours per week.

A third way to respond to the risk of armed assailants on church property is to use church members legally authorized to carry a concealed weapon as non-uniformed security guards. The problem here is the wide range of competency among permit holders in handling firearms, with some permit holders having a very minimal ability in the use of firearms resulting in a significant risk of collateral damage in the use of a firearm, and others having extensive training and ability. As a result, church leaders should not treat all permit holders equally. Churches can help to bolster the competency of such persons in the protection of church members by the following actions: First, place a reasonable limit on the number of concealed weapons permit holders that the church will use as part of its response to armed shooters; second, perform a thorough background check on each person, including references; third, use a written application that includes a description of the applicant's weapons training; fourth, periodically confirm that the individual's permit is active; fifth, only use concealed weapons permit holders who have passed the same firearms training course that is prescribed for local law enforcement personnel in your community; and sixth, only use these persons as auxiliaries who at all times are under the control and direction of law enforcement personnel.

A fourth way to address the risk of armed assailants on church property is the use of technology. In evaluating the feasibility of various technologies to prevent or reduce the risk of shootings in public schools, the United States Department of Justice noted that the effectiveness, affordability, and acceptability of each technology must be considered. Devices that often are employed by churches and commercial businesses to prevent or reduce the risk of criminal acts include surveillance cameras, metal detectors, and entry control devices. In each case, church leaders should consider the device's effectiveness, affordability, and acceptability in evaluating its usefulness. Most church leaders, even in high crime areas, would consider the use of metal detectors at church entrances to be so offensive to congregational members and visitors, and so fundamentally incompatible with the nature of the church as a sanctuary, that their use would be unthinkable. Even if metal detectors at church entrances would be an effective deterrent to violent crime, and affordable, they would be considered unacceptable by most church members. This would especially be so for churches in low crime areas, and with no history of shootings or other violent crimes on or near church property.

Here are some points to consider regarding metal detectors: 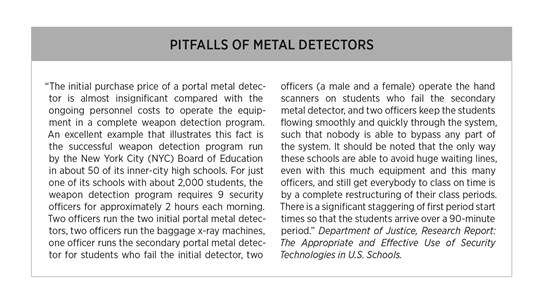 First, as noted above, church shootings and other violent crimes on church premises are rare.

Second, the law imposes upon any place of public accommodation, including a church, a duty to protect occupants against foreseeable criminal acts. The level of protection is directly proportional to the degree of foreseeability. Many courts assess foreseeability on the basis of the following factors: whether any criminal conduct previously occurred on or near the property; how recently and how often similar crimes occurred; how similar the previous crimes were to the conduct in question; and what publicity was given the previous crimes to indicate that the church knew or should have known about them. If shootings or other violent crimes on church property are highly foreseeable based on these factors, then a church has a heightened duty to implement measures to protect occupants from such acts.

Third, many church leaders and congregations, guided and informed by their theological and ethical values, feel compelled to take steps to protect human life from acts of violence whether or not they have a legal duty to do so.

Fourth, in evaluating which technologies to implement in order to discharge a legal or moral duty to protect human life, church leaders should consider the affordability, effectiveness, and acceptability of a measure before implementing it.

Sixth, contact other churches and other places of public accommodation in your community to see what measures they have enacted to protect occupants against shootings and other violent crimes. Examples include schools, malls, libraries, restaurants, stores, sports facilities, theatres, and concert halls. This research will help church leaders ascertain the "community standard," which is an important consideration in deciding if a property owner was negligent.

Seventh, note that even the most stringent protective measures would have prevented few if any shooting incidents on church property. In fact, in some of these cases, the church had implemented what seemed to be reasonable precautionary measures. However, no measures will foil an armed and dedicated assailant, especially if that person plans on taking his or her own life.

Eighth, while it is not possible for churches to prevent acts of violence on their premises, it is possible to deter such acts in some cases, and to contain the damage and destruction when an incident occurs.

The United States Department of Justice has prepared the following recommendations for schools to help reduce the risk of violent crime. The word "church" is substituted for "school":

First, every church needs a well-thought-out, annually updated crisis response plan, with regular training for all those who are involved.

Second, the crisis plan needs to make assignments of who is in charge during different types of emergencies; who is the alternate in charge; who is called first, by whom, from where, and using what; whether persons are relocated and how; what type of statement is made to the press and by whom; and who is in charge when emergency responders arrive on the scene.

Third, ideally, a preselected team will immediately be mobilized upon the occurrence of a serious threat. Team members will know who to look to for decisions and then proceed automatically in their roles under the church's crisis response plan.

Fourth, crisis team members should wear distinctive clothing, and be located in places of high visibility, so they can be contacted in the event of a crisis.

Sixth, consider the use of "duress alarms" that anyone can activate to report a crisis. These can activate an audible alarm, or an inaudible alarm that is detected only by crisis team members and first responders.

Seventh, be sure to have your crisis plan reviewed by local law enforcement professionals, your insurance agent, and an attorney.

"Foresight, not retrospect, is the standard of diligence. It is nearly always easy, after an accident has happened, to see how it could have been avoided. But negligence is not a matter to be judged after the occurrence. It is always a question of what reasonably prudent men under the same circumstances would or should, in the exercise of reasonable care, have anticipated. Reasonable anticipation is that expectation created in the mind of the ordinarily prudent and competent person as the consequence of his reaction to any given set of circumstances. If such expectation carries recognition that the given set of circumstances is suggestive of danger, then failure to take appropriate safety measures constitutes negligence. On the contrary, there is no duty to guard when there is no danger reasonably to be apprehended. Negligence is gauged by the ability to anticipate. Precaution is a duty only so far as there is reason for apprehension. Reasonable apprehension does not include anticipation of every conceivable injury. There is no duty to guard against remote and doubtful dangers."[280] Lopez v. McDonald's Corporation, 238 Cal.Rptr. 436 (Cal. App. 1987) (quoting SHEARMAN AND REDFIELD ON NEGLIGENCE).