Key point 7-03.02. Some courts apply the "compulsory deference" rule in resolving disputes over the ownership and control of property in "hierarchical" churches. Under this rule, the civil courts defer to the determinations of denominational agencies in resolving such disputes.

A few states have adopted the compulsory deference rule in resolving church property disputes involving hierarchical churches, and have awarded title to local church property to a denominational agency.[50] See, e.g., Cumberland Presbytery v. Branstetter, 824 S.W.2d 417 (Ky. 1992) (Cumberland Presbyterian Church retained title to the property of a local church that voted to disaffiliate, because of a trust provision in the national church's constitution); Dixon v. Edwards, 172 F. Supp.2d 702 (D. Md. 2001), aff'd, 290 F.3d 699 (4th Cir. 2002); The American Carpatho-Russian Orthodox Greek Catholic Diocese of the U.S.A. v. Church Board, 749 A.2d 1003 (Common. Pa. 2000). The Supreme Court has recognized this as one of many possible options available to the civil courts in resolving church property disputes.

• Applying the "neutral principles of law" approach, the California Supreme Court ruled that the national Episcopal Church owned the property of a local church that voted to disaffiliate from the denomination as a result of the ordination of a gay priest. Although for more than fifty years the deeds to the church property vested title in the local church, the court concluded that the local church, from the beginning of its existence, agreed to be part of the Episcopal Church and to be bound by its canons. Canon I.7.4, sometimes referred to as the "Dennis Canon"), states: "All real and personal property held by or for the benefit of any Parish, Mission or Congregation is held in trust for this Church and the Diocese thereof in which such Parish, Mission or Congregation is located. The existence of this trust, however, shall in no way limit the power and authority of the Parish, Mission or Congregation otherwise existing over such property so long as the particular Parish, Mission or Congregation remains a part of, and subject to, this Church and its Constitution and Canons." Based largely on the Dennis Canon, the court concluded: "Applying the neutral principles of law approach, we conclude that the general church, not the local church, owns the property in question. Although the deeds to the property have long been in the name of the local church, that church agreed from the beginning of its existence to be part of the greater church and to be bound by its governing documents. These governing documents make clear that church property is held in trust for the general church and may be controlled by the local church only so long as that local church remains a part of the general church. When it disaffiliated from the general church, the local church did not have the right to take the church property with it."

• The Iowa Supreme Court ruled that the property of a local Presbyterian church that attempted to disaffiliate from the United Presbyterian Church in the United States of America (UPCUSA) belonged to the denomination. It based its decision on the compulsory deference rule (a church judicatory determined that the denomination owned the property), but it also noted that the same result would occur under an application of the neutral principles of law approach. The court observed: "When its provisions are construed together, the Book of Order gives UPCUSA exclusive ultimate control of the uses and disposition of local property. Local church property decisions are subject to general church approval, and the general church may take over local church government, as it did in this case, when it disagrees with the local church handling of church affairs."[51] Fonken v. Community Church, 339 N.W.2d 810 (Iowa 1983).

• A Massachusetts court applied the compulsory deference rule in resolving a property dispute between a church and a hierarchical denomination, and enforced the denomination's resolution of the dispute. The court concluded: "It is one thing to defer to the determination of religious matters by ecclesiastical authorities, or even to decline jurisdiction over a request by dissident church members to reexamine or to set aside that determination. It is quite another to refuse jurisdiction over a request by the ecclesiastical authorities themselves for civil enforcement of their resolution of matters subjected, by church structure, to their control. Other courts have exercised jurisdiction within that limited scope where necessary to enforce ecclesiastical determinations within a hierarchical church."[52] Episcopal Diocese of Massachusetts v. Devine, 797 N.E.2d 916 (Mass. App. 2003). The court also ruled that the local church held its property in trust for a parent denomination as a result of a canon adopted by the denomination in 1979.

• A Michigan state appeals court applied the compulsory deference rule to a church property dispute involving an hierarchical denomination (the Protestant Episcopal Church in the United States of America, or simply the "PECUSA"). The court observed: "In the freedom of conscience and the right to worship allowed in this country, the defendants and members of this church undoubtedly possessed the right to withdraw from it, with or without reason. But they could not take with them, for their own purposes, or transfer to any other religious body, the property dedicated to and conveyed for the worship of God under the discipline of this religious association; nor could they prevent its use by those who choose to remain in the church, and who represent the regular church organization. If complainants maintain the allegations of their bill—that they represent the regularly organized body of the church, and are its regular appointees—they are entitled to the relief prayed."[53] Bennison v. Sharp, 329 N.W.2d 466 (Mich. App. 1982). See also Calvary Presbyterian Church v. Presbytery, 384 N.W.2d 92 (Mich. App. 1986). A Michigan appeals court ruled that "it would be inappropriate to apply the neutral principles test to determine disputes between people who have agreed, as a part of the establishment of their church, to resolve disputes between themselves within their internal power structure." In Board of Trustees v. Michigan District Missionary Church, 2003 WL 21854519 (unpublished decision, Mich. App. 2003), a Michigan appeals court ruled that a regional church had the legal authority to control the property of a local church that attempted to disaffiliate. The court noted that the United States Supreme Court has approved the resolution of church property disputes on the basis of "neutral principles of law," but concluded that this approach is not required. The court applied a "theory of hierarchy" as the "preferred approach" in Michigan. Under this approach, if "a religious organization is but a subordinate part of a general church in which there are superior ecclesiastical tribunals with a more or less complete power of control," then the higher authorities within the church are entitled to control the property.

• A Texas court awarded title to a local church's property to a denomination following the church's attempt to disaffiliate. The court observed: "[Texas] courts have consistently followed the deference rule in deciding hierarchical church property disputes since the Texas Supreme Court adopted the rule. … The deference rule imputes to members 'implied consent' to the governing bylaws of their church. Persons who unite themselves to a hierarchical church organization do so with 'implied consent' that church bylaws will govern. …" The court concluded: "Where a congregation of a hierarchical church has split, those members who renounce their allegiance to the church lose any rights in the property involved and remain loyal to the church. It is a simple question of identity."[54] Green v. Westgate Apostolic Church, 808 S.W.2d 547 (Tex. App. 1991).

• A West Virginia appeals court awarded the assets of a local church to a national denomination. The congregation voted to secede from a parent denomination and establish a new church. The church's trustees attempted to convey the church's assets to the new organization. This conveyance was challenged by the denomination, which asserted that the church's assets belonged to it. It cited a provision in its constitution dictating that "no church group desiring to leave this body shall have any legal claim on church property if the property in question was purchased and paid for with general funds or if general funds were in any way used in the purchase thereof." Since the denomination produced a copy of a check in the amount of $300 that it had issued to the local church in 1964 to assist with church construction, the court concluded that the church's assets belonged to the denomination and that the attempted conveyance by the local trustees was void. The court further noted that with respect to hierarchical churches the civil courts "should respect, and where appropriate enforce, the final adjudications of the highest church tribunals, provided that such adjudications are not procured by fraud or collusion. If a church has a hierarchical structure and its leaders have addressed a doctrinal or administrative dispute, the civil courts do not intervene, absent fraud or collusion." Since the denomination had addressed the issue of property disputes in its constitution, the civil courts were bound to defer to that document and award the local congregation's assets to the denomination.[55] Original Glorious Church of God in Christ v. Myers, 367 S.E.2d 30 (W. Va. App. 1988). 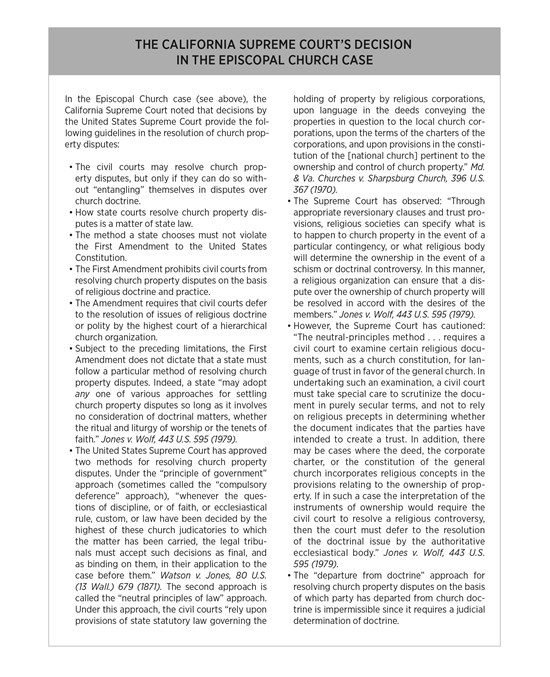