Discrimination Based on Use of Legal Substances

Key Point 8-21.03. Many states have enacted laws prohibiting employers from disciplining employees for using lawful products (such as tobacco) during non-working hours. Some of these laws exempt religious organizations.

Many states have enacted laws prohibiting employers from disciplining employees for using lawful products (such as tobacco) during non-working hours. Some of these laws exempt religious organizations. Even without such an exemption, it is unlikely that most courts would apply such a law to the relationship between a church and its ministers. 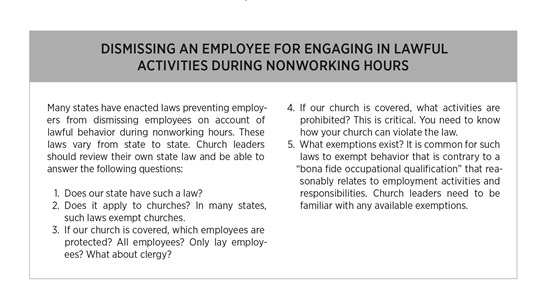 In most states, employees who are hired for an indefinite period are considered "at will" employees. This means that the employment relationship may be terminated at will by either the employer or employee, with or without cause, and with or without notice. The courts and state legislatures have created a number of exceptions to the at will employment rule. These exceptions limit the right of an employer to terminate an at will employee. Employees who are hired for a specific term are not at will employees, and they may be terminated only if the employer has "good cause."

The dismissal of an employee can be a traumatic experience. When an employee is dismissed who has been employed by the church for many years, there often is a desire by other employees and the congregation itself for information about the dismissal. After all, what could this trusted and faithful employee have done to warrant such harsh treatment? Often, church leaders resist sharing any of the details, fearing they will be sued if they do. This concern is understandable. However, problems can occur when nothing is disclosed to the staff or membership. Church leaders under these circumstances often are accused of acting arbitrarily, and there is a demand for an explanation. Refusal to respond to such demands may place the church leadership in an even worse light.

There is a possible answer to this dilemma. Many states recognize the concept of "qualified privilege." This means that statements made to others concerning a matter of common interest cannot be defamatory unless made with malice. Statements are made with malice if they are made with a knowledge that they are false, or with a reckless disregard as to their truth or falsity.

In the church context, this privilege protects statements made by members to other members concerning matters of common interest. Such communications cannot be defamatory unless malice is proven. Church leaders who decide to disclose why an employee was dismissed can reduce the legal risk to the church and themselves by following a few basic precautions: