Key Point 8-09. Congress has enacted a number of employment and civil rights laws regulating employers. These laws generally apply only to employers that are engaged in interstate commerce. This is because the legal basis for such laws is the constitutional power of Congress to regulate interstate commerce. As a result, religious organizations that are not engaged in commerce generally are not subject to these laws. In addition, several of these laws require that an employer have a minimum number of employees. The courts have defined "commerce" very broadly, and so many churches will be deemed to be engaged in commerce.

Congress has enacted a variety of employment and civil rights laws that apply to some churches and religious organizations. These include Title VII of the Civil Rights Act of 1964, the Age Discrimination in Employment Act, the Americans with Disabilities Act, the Family and Medical Leave Act, the Fair Labor Standards Act, the National Labor Relations Act, the Employee Polygraph Protection Act, and the Occupational Safety and Health Act. See Table 8-6 for a summary of the more important laws.

Before turning to a direct examination of these laws, it is important to recognize that they all were enacted by Congress under its constitutional authority to regulate interstate commerce. As a result, these laws apply only to employers engaged in a business, industry, or activity "affecting commerce."[58] 29 U.S.C. § 142 (National Labor Relations Act); 29 U.S.C. § 203 (Fair Labor Standards Act); 29 U.S.C. § 630(b) (Age Discrimination in Employment Act); 29 U.S.C. § 652 (Occupational Safety and Health Act); 42 U.S.C. § 2000e(b) (Title VII of the Civil Rights Act of 1964). A more limited standard applies under the Fair Labor Standards Act (discussed earlier in this chapter). Is a church engaged in a business, industry, or activity affecting commerce? This is a complex question for which no simple answer can be given. In general, the answer in a particular case will depend upon how narrowly or expansively a court construes the term affecting commerce, and upon the size of the church and the nature of its operations. In general, the courts have interpreted the "affecting commerce" requirement broadly. As a result, church leaders should never assume that their church does not satisfy this requirement without legal advice. Churches can be exposed to substantial liability if the erroneously assume that they are not subject to federal employment laws because they do not meet the commerce requirement.

A federal appeals court concluded that a church operated school was engaged in commerce.[59] Equal Employment Opportunity Commission v. St. Francis Xavier Parochial School, 117 F.3d 621 (D.C. Cir. 1997). A disabled woman who was turned down for a job at the school filed a lawsuit claiming that the school discriminated against her in violation of the federal Americans with Disabilities Act. The ADA prohibits employers engaged in an activity "affecting commerce" and having at least 15 employees from discriminating in any employment decision on account of the disabled status of an employee or applicant for employment who is able to perform the essential functions of the job with or without reasonable accommodation by the employer. Was the school engaged in an industry affecting commerce? The court noted that the ADA defines this crucial term as "any activity, business, or industry in commerce or in which a labor dispute would hinder or obstruct commerce or the free flow of commerce." The church insisted that it was not an "industry affecting commerce" under this definition, but the court concluded that it was. It relied on an earlier case in which a federal appeals court found that an employer affected commerce since (1) it purchased products and supplies from out-of-state; (2) its employees traveled out-of-state on the employer's business; and (3) its employees made interstate telephone calls.[60] Martin v. United Way, 829 F.2d 445 (3d Cir.1987). The court concluded:

However, the court cautioned that the woman had not provided any evidence that the church had engaged in activities affecting interstate commerce, and so "this issue is inconclusive." The court added that "[we] presume that some of the same factors exist with respect to the church." There is little doubt that the court believed that the church was engaged in commerce.

There are a number of factors indicating that a church or other religious organization is engaged in commerce. These include any one or more of the following:

Key Point. The United States Supreme Court issued a ruling in 1997 that defined commerce very broadly. The case is important because it involved a religious organization (a church affiliated summer camp). This case makes it more likely that churches and other religious organizations will be deemed to be engaged in commerce. The Court observed: "Even though [the] camp does not make a profit, it is unquestionably engaged in commerce, not only as a purchaser … but also as a provider of goods and services. … The attendance of these campers necessarily generates the transportation of persons across state lines that has long been recognized as a form of commerce. … Our cases have frequently applied laws regulating commerce to not for profit institutions. … The nonprofit character of an enterprise does not place it beyond the purview of federal laws regulating commerce. We have already held that the commerce clause is applicable to activities undertaken without the intention of earning a profit. … We see no reason why the nonprofit character of an enterprise should exclude it from the coverage of [the commerce clause]."[62] Camps Newfound/Owatonna v. Town of Harrison, 117 S. Ct. 1590 (1997).

activities of eleemosynary, religious, or educational organizations may be performed for a business purpose. Thus, where such organizations engage in ordinary commercial activities, such as operating a printing and publishing plant, the business activities will be treated under the Act the same as when they are performed by the ordinary business enterprise.[65] 29 C.F.R. § 779.214. 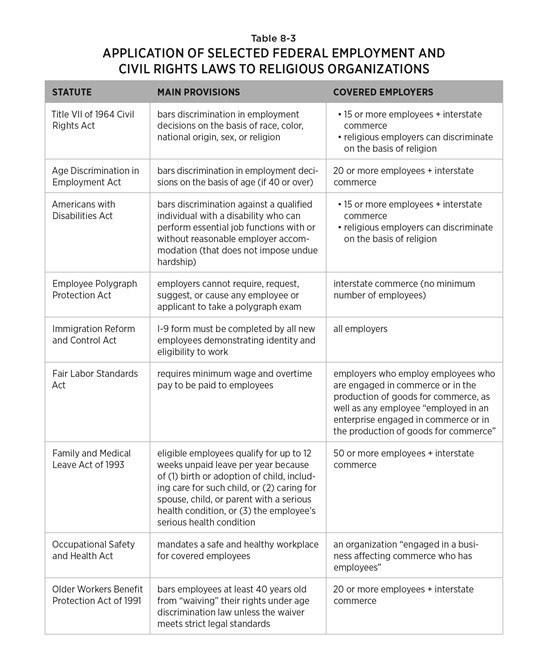 The National Labor Relations Board has ruled that the publishing and distribution of Sunday school literature by a religious denomination is an activity affecting commerce.[66] Sunday School Board of the Southern Baptist Convention, 92 N.L.R.B. 801 (1950). But cf. Lutheran Church Missouri Synod, 109 N.L.R.B. 859 (1954). It is also possible that a church that operates a child care facility, an elementary school, a home for the aged, or an orphanage is engaged in an activity affecting commerce
.