What Churches Should Know About State-Mandated Sexual Harassment Training Laws

Since 2018, the majority of states have enacted legislation either mandating or recommending that employers train employees on sexual harassment avoidance. This happened at great speed. It can often take decades for legal changes at the state level to become a national trend.

New study on sexual harassment in the Christian workplace: Learn about the extent of this troubling problem in churches and parachurch ministries.

The speed of this development can be traced to the great cultural shift arising from the #MeToo movement, which became a high-profile cultural marker following heavily publicized Hollywood sexual harassment scandals in 2017. With sexual harassment in the workplace as a major focal point, a program to reduce the incidence of harassment at work through education became a significant objective of the #MeToo movement. Legislation to mandate such workplace training ensued.

Most states have enacted laws that address workplace sexual harassment in some fashion. Nearly all of these have been enacted within the last two years, and many took effect just in 2020.

One impact of this rapidly evolving development has been in the widely varied approaches from state to state. No two states have statutes that follow any type of uniform approach.

Mandatory education for adults as a condition for employment was one dramatic shift in the law, but most states that have legislated in this area have done so cautiously. A number of states require only that public employees obtain some training in avoiding sexual harassment, and other states recommend training. At least seven states, however, mandate some form of training requiring private employers to provide training for their employees on creating a work environment that is informed about how to identify and avoid sexual harassment (see “How Seven States Mandate Employers to Train on Sexual Harassment” for more details).

Because the enactment of these state laws has not led to a significant public backlash, it can be expected that more states will pass these types of laws, and those that merely encourage training may follow the lead of those who have mandated such training.

How churches are affected

While #ChurchToo, a church-focused variation of #MeToo, began in 2018, mandatory harassment training in church offices has not been a visible part of that movement. Churches nonetheless may fall under these emerging state laws, since the laws are aimed directly at the employer-employee relationship, and none of the state laws carve out exceptions for churches.

While the claim of a religious liberty exception to any government-mandated training program may someday prove to have merit, these laws have not yet been challenged in court. Churches should be prepared for federal courts to take the position that workplace protection statutes are laws of general application that are not subject to a free exercise of religion exemption.

Inevitably, a church’s response to these government-mandated training programs will impact the defense of a sexual harassment claim within the church. Any church without a training program in place may be at a disadvantage in defending such a case because the church may appear to have been insensitive to the risks faced by the alleged victim. Considering this rapidly emerging trend, churches may reduce the risk of sexual harassment if they stay ahead of this issue by providing helpful training to employees to foster a healthy workplace environment.

State laws that mandate training possess some common traits. Among them:

The states that do provide guidance on the content follow a general pattern that includes the following points:

Several human resources education vendors offer products meeting the requirements of all states, including those few that give specific details regarding the content of the instruction. However, these generalized programs are provided for a wide range of businesses, not specifically religious organizations. 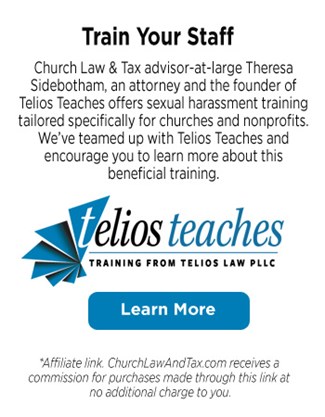 As a result, some of these materials might strike a tone that church leaders and other religious employers find unsuitable, even if the principles taught in these programs are generally agreeable. For example, a church that wants scripturally based instruction may find the secular foundation of the commercial materials to be out of touch with the church’s moral positions.

The best approach for many churches may be to take the general content outline suggested by their state’s law (or another state’s, if their respective state offers none) and then develop a program that can be rooted in the church’s general approach to ministry. To satisfy the emerging pattern of legal requirements for workplace training, the training should be comprehensive and run at least two hours. It should cover:

One good model for a church’s training is the “State of Illinois Sexual Harassment Prevention Training” program prepared by the state’s Department of Human Rights. These materials need to be adapted to the law of the church’s home state. But the general outline laid out in this 35-slide PowerPoint presentation is comprehensive and offers a good template for the scope and depth of adequate training. Notably, it provides a lengthy list of behaviors that constitute sexual harassment, including gestures, the use of nicknames, and the making of certain sounds.

Caution. Every church preparing its training program will need to consider how it will approach gender identity and sexual orientation issues. While states may differ in their treatments of these issues, several states consider these issues to be subject to the same approaches used in addressing any other harassment. Since these statutes are very new, the full implications of these laws to churches have not been developed by courts. Christian churches with orthodox views of human sexuality and marriage should consult further with qualified local legal counsel regarding how they handle these specific topics.

While some churches may bristle at the idea of government-mandated messages of instruction within churches, the liability exposure to churches that are unprepared for sexual harassment training is significant. Even in those states that do not expressly mandate training, the absence of a training program may be used as evidence of negligence by a church. Ascertaining the church’s best approach to risk assessment will increasingly include a full discussion of the best way to reduce the incidence of sexual harassment, which unfortunately remains an issue in churches.

Establish policies and best practices to govern the use of technology for church staff.

Learn about the Fair Labor Standards Act and how it applies to churches.

Learn how to find the best solutions when choosing software and hardware for your church.

Establish policies and best practices to govern the use of technology for church staff.
Buy now

What Churches Should Know About State-Mandated Sexual Harassment Training Laws