Key point 8-12.01. Title VII of the Civil Rights Act of 1964 prohibits employers engaged in commerce and having at least 15 employees from discriminating in any employment decision on the basis of race, color, national origin, gender, or religion. Religious organizations are exempt from the ban on religious discrimination but not from the other prohibited forms of discrimination.

A federal court in North Carolina ruled that a male teacher employed by a church school could sue the school for employment discrimination following his termination from employment based on his plans to marry another male.

The plaintiff is a former teacher and substitute teacher at a Catholic high school (the “school”) in Charlotte, North Carolina.

The plaintiff came out as homosexual to his close friends and family in 1995. He was married to a woman for about 24 years; they divorced around 2002.

When the plaintiff retired from full-time teaching, he stayed on as a substitute teacher with the school from the fall of 2012 until December 2014. He was not required to sign a contract for employment as a substitute teacher. He primarily substituted for English courses because he had expertise in that subject. He only taught nonreligious subjects during his time at the school.

While employed as a full-time teacher, the plaintiff received positive work evaluations. He also won the Inspirational Educator Award from North Carolina State University in 2011 and the Charlotte Catholic Teacher of the Year award in 2012. The school’s principal said that the plaintiff was the “only teacher who had been nominated for the award every year since its inception.”

In 2000, while he and his wife were separated, the plaintiff began a romantic relationship with another man. The two began living together in 2002, and in 2013 they decided to get married.

In October 2014, the plaintiff announced his engagement to his companion on Facebook with a post that read:

The assistant principal informed the plaintiff by phone that he could no longer work as a substitute teacher because he “announced his intention to marry a person of the same sex.”

The plaintiff claimed that he was emotionally devastated and suffered a loss of identity and self-worth after being eliminated from the substitute teacher list of the school.

The plaintiff sues over sex discrimination

The plaintiff sued the school and diocese (the “church defendants”) claiming that they violated Title VII of the Civil Rights Act of 1964, which prohibits employers from discriminating on the basis of sex (including sexual orientation) in employment decisions.

The court ruled that the church defendants’ termination of the plaintiff as a substitute teacher violated Title VII’s ban on employment discrimination based on sexual orientation.

The Catholic Church believes marriage should be between a man and a woman. Human sexual expression belongs to “husband and wife alone.” Therefore, unmarried people should not engage in sexual intercourse, and same-sex couples should not engage in sexual expression because they cannot be husband and wife. [The Church] believes that while people who experience homosexual tendencies or thoughts are to be treated with respect and compassion, individuals who act on those thoughts engage in “disordered” conduct since their acts violate God’s plan for human sexuality and reproduction.

The school used several documents to inform their employees of its expectations for their behavior. These included a code of ethics, a personnel policies handbook, employment contracts, training sessions, and a faculty handbook.

The court acknowledged that Title VII exempts religious organizations from the ban on discrimination in employment based on religion. But the court said Title VII does not exempt religious organizations from the ban on the law’s other categories of prohibited employment discrimination, including sexual orientation. The court explained:

The court also rejected the church defendants’ argument that the “ministerial exception,” which generally shields churches from employment discrimination claims involving ministers, prevented the court from resolving the plaintiff’s lawsuit since he was not a “minister.” 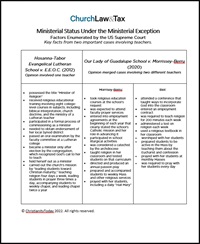 The North Carolina court concluded that “because of the abundant evidence that [the teachers in Hosanna-Tabor and Our Lady of Guadalupe] performed vital religious duties . . . the [Supreme Court] held that they qualified as ministers under the ministerial exception.” The court continued:

Unlike the teachers in these two most recent Supreme Court cases, very few facts weigh in favor of finding that Plaintiff is a minister. The only factor that weighs in favor of finding that he is a minister is that he works at a Catholic School with a Catholic mission and was tasked in his employment handbook with helping Defendants carry out their religious mission. However, many other facts in the record indicate that he was not a minister. . . . First, [the church defendants] did not bestow the title of “minister, with a role distinct from that of most of its members,” on Plaintiff. Plaintiff was primarily a substitute teacher of English and drama—purely secular subjects. Unlike the plaintiff in Hosanna-Tabor, who was issued a “diploma of vocation” and accorded the official title of “Minister of Religion, Commissioned,” Plaintiff here was a non-contractual secular employee. Furthermore, unlike the plaintiff in Hosanna-Tabor, Plaintiff was not required to be a Catholic or even a Christian to hold his post.

Third, Plaintiff did not “[hold] [himself] out as a minister of the Church by accepting the formal call to religious service” or by claiming religious tax benefits. Plaintiff, as with other teachers at [the school], would sometimes begin class with a prayer. But sometimes he would have students lead prayer and sometimes there would be no prayer at all. The content of the prayer was not specified, the prayers could be ecumenical, and the prayers were not required.

Finally, Plaintiff’s position as substitute English and drama teacher did not directly “[reflect] a role in conveying the Church’s message and carrying out its mission.” [The school’s] teachers do not have to reference Catholic principles. The High School administration prefers that secular teachers, like Plaintiff, avoid discussing Catholic doctrine. Unlike all three teachers in Hosanna-Tabor and Our Lady of Guadalupe, Plaintiff did not teach religion in his classes and was not tasked with preparing students for participation in Catholic worship services.

What this means for churches

1. Religious organizations may discriminate based upon religion under Title VII—but not beyond

Title VII of the Civil Rights Act of 1964 bans discrimination in employment decisions on the basis of race, color, national origin, sex (including sexual orientation) and religion. Religious organizations are exempt from the ban on religious discrimination, but not from the other prohibited forms of discrimination.

2. Most churches are subject to Title VII or a similar state statute

While Title VII only applies to employers involved in interstate commerce and having at least 15 employees, most states have enacted similar laws that apply to smaller employers. As a result, most churches are subject to either Title VII or a comparable employment discrimination statute under state law.

3. Religious ban applies to both religious and “secular” positions

Many church leaders are unaware that Title VII’s ban on religious discrimination in employment decisions applies to both religious and “secular” positions in a church. This court explicitly acknowledged that the church and school were allowed to discriminate on the basis of religion in terminating the plaintiff, even if his position as a teacher was deemed to be “secular.” But they could not discriminate in employment decisions on the basis of the other forms of prohibited discrimination under Title VII (race, color, national origin, or sex). The court explained:

4. The court said this case’s facts specifically favored the plaintiff

The school claims that [Plaintiff] was fired for his support of gay marriage—something the Catholic Church opposes. Plaintiff claims he was fired, or at least suffered a more severe employment action, because of who he is as a gay man. The court respects the sincerity of the Catholic Church’s opposition to Plaintiff’s actions. With a slightly different set of facts, the court may have been compelled to protect the church’s employment decision. However, [whereas] here, Plaintiff lost his job because of sex discrimination and where he was working as a substitute teacher of secular subjects without any responsibility for providing religious education to students, the court must protect Plaintiff’s civil and employment rights.

5. Guidance for applying the ministerial exception

Lastly, the court’s opinion provides helpful guidance in determining if a teacher is subject to the ministerial exception. In particular, the court found the absence of a ministerial title, the lack of ministry training, and the absence of performing “vital religious duties,” along with the teacher’s decision not to use any tax benefits available to ministers, all pointed to determining the teacher was not a minister and the school could not use the ministerial exception as a defense.

If updated regularly, an employee handbook can offer valuable legal protection against civil court claims made by disgruntled staff members.

Keep your church safe and legal and as you strive to serve the immigrant communities in your context.

Keep your church safe and legal and as you strive to serve the immigrant communities in your context.
Buy now 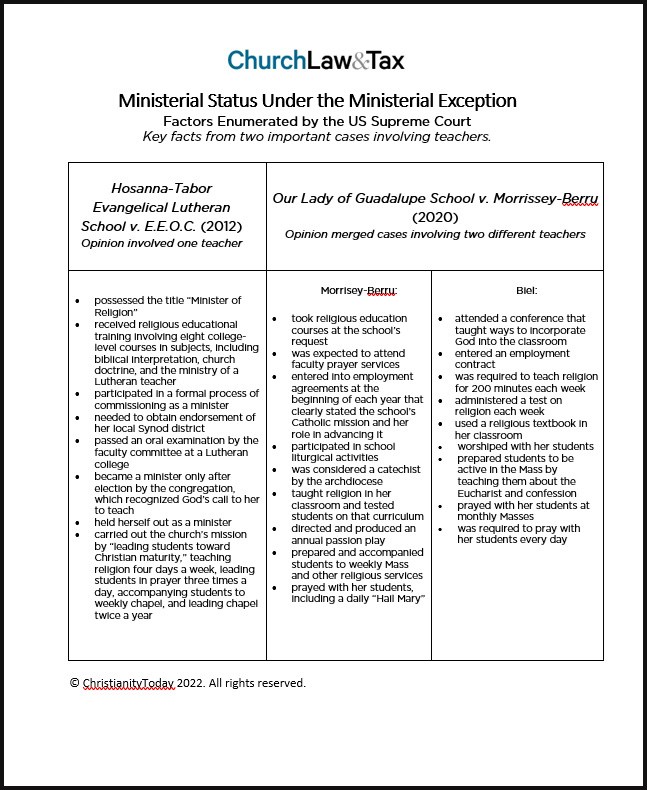